Solidarity with the Heathrow 13 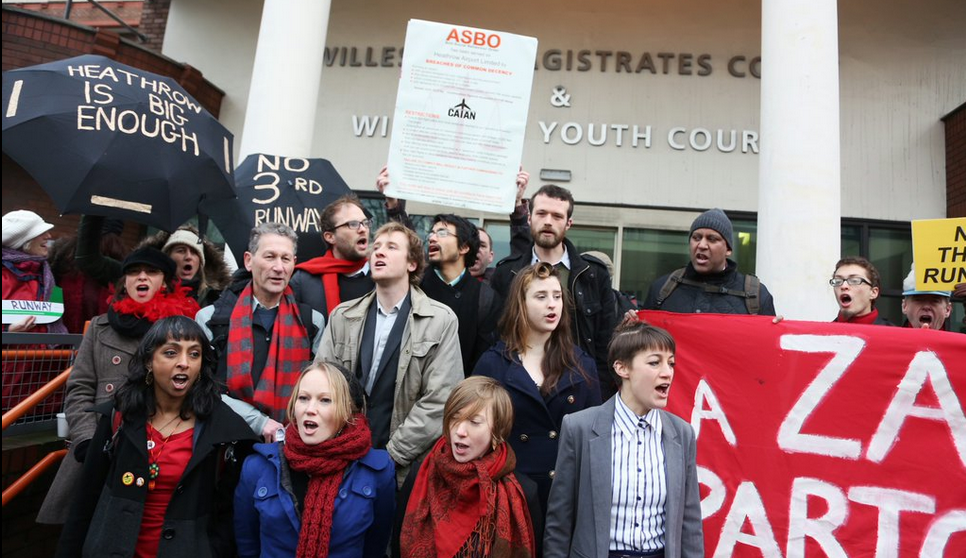 The 'Heathrow 13' who blocked the north runway at Heathrow in July 2015 to protest against the climate folly of a third runway have been told they are likely to face prison, because of the 'astronomical cost' of their actions - 25 flights cancelled. And yet the aviation sector continues to get off scott-free despite the astronomical cost of its own contribution to climate change.

Currently, aviation accounts for about 6% of the UK’s greenhouse gas emissions, and 2% of the carbon dioxide produced by people globally. But as aviation is predicted to expand while emissions from other sectors are cut, a study commissioned by the European parliament expects it to produce over a fifth of the world’s CO2 emissions by 2050. Tellingly, the Paris climate change agreement does not even mention aviation and shipping.

Demand for business flights is falling, while 70% of British flights are taken by just 15% of us - the frequent flyers - so one would think that managing demand would be a sensible approach. Instead, the government wants to enable the number of flights to double, building a new runway in the South East which would allow emissions to soar.

Ten of the Heathrow 13 have no previous convictions (three have previous convictions for aggravated trespass). This would be the first time peaceful environmental protesters have gone to prison for the offence of aggravated trespass since it was introduced two decades ago. As the battle against not just aviation expansion but widespread fracking is heating up, what will this mean for others taking direct action in defence of our planet.

Join supporters of the Heathrow 13 at a solidarity protest on the morning they are due to be sentenced - Wednesday 24th February from 9am at Willesden Magistrates Court, 448 High Road, London NW10 2DZ. Facebook event

The Heathrow 'hooligans' are our modern day freedom fighters.