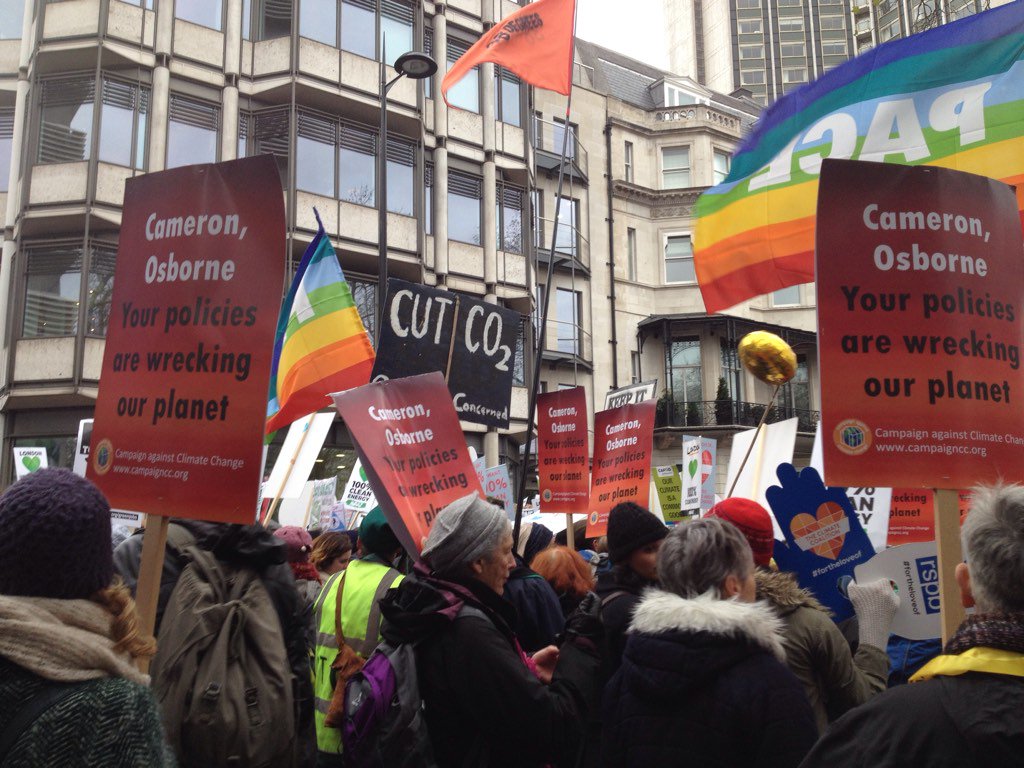 "...I see climate action as a vital safety net for our families and business. Protecting our homes, our livelihoods, our prosperity."

So said Amber Rudd, Secretary of State for Energy and Climate Change

But as she spoke, a comprehensive demolition job was already underway and it has left those who care about climate change and Britain's clean energy future appalled. While the Climate Change Act is still there it stands amid the wreckage of policies intended to achieve our legally binding climate targets.

It is not just climate campaigners who are shocked: businesses who invested and planned on the basis of established policies, developed over many years, have found these suddenly knocked away. An estimated 30,000 jobs are at risk in the solar industry because the government would not wait a few years until the industry was well-established and self-supporting, but wants to cut funding immediately.

The government admits that the UK is off course to meet legally binding renewables targets.

And what about our emissions targets? Cameron has justified backing gas rather than renewables, on the grounds that our emissions targets will be met by using unproven carbon capture and storage technology (burying the problem of CO2 - both literally and metaphorically). But as of Tuesday 25 November £1 billion funding for commercial testing has just been withdrawn read more The credibility gap is becoming a chasm...

Here are the main policy changes that risk wrecking our climate:

Cuts to solar funding - endangering a vital industry in order to save households just 50p-£1.20 a year on bills. New community energy projects, which help not just our climate but have many benefits for local communities, will be far more difficult to establish read more

Making renewables pay the climate change levy - which was meant to encourage renewables - extending this tax to them it will cost the industry  £3.9 billion read more

Planning changes to block onshore wind - making it much more difficult to build wind turbines, even when schemes have community support. read more

NEW: Even when councils reach a decision, ministers may overrule it (see above)

NEW: Osborne announced in his autumn statement that funding for grants for insulation and efficient boilers for low-income households would also be cut. read more

Planning an unnecessary new runway in the South East (and quietly ditching previous pledges on Heathrow) - a new runway at Heathrow could emit the same amount of CO2 as the whole country of Kenya! read more

Removing tax incentives to buy less-polluting cars - more polluting cars will be cheaper to run, efficient ones, much more expensive under the new rules read more