No Going Back: A Just Transformation 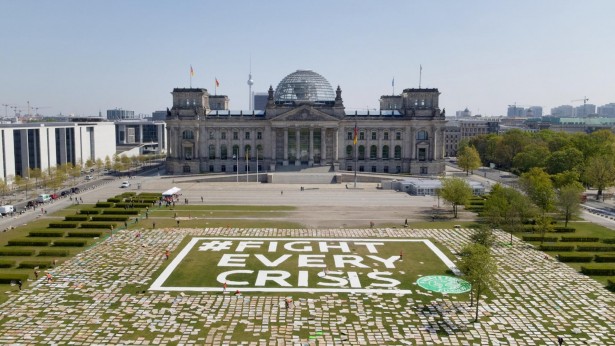 Globally, we stand at a crossroads. Billions are being spent on restarting the economy, but will this money be used to prop up the same broken system? Or can we build something better? The current crisis has hugely increased public awareness, both of the deadly fractures of climate breakdown, inequality, racism, and of the possibilities of rapid action and societal transformation. There is a strong demand for change: to seize this opportunity to rethink and rebuild.

We need immediate action, while spending decisions are being made. We have to push back against corporate lobbying for unconditional bailouts of dirty industries. We also need longer term movement building, learning from the many different facets of this movement. For many of us that will also mean keeping the pressure on in our own trade unions.

We've compiled a list of resources below. Inclusion in this list doesn't mean the Campaign against Climate Change would endorse every measure, but we think they're useful for information, inspiration and to give a sense of the public demand for change. What do you think is most important? What don't you agree with? What is most crucial for your local area?

Also below, an update on the government's announcements so far on spending and policy - and why it's not enough.

Johnson's claims of a 'New Deal' don't stand up. Franklin D Roosevelt's 'New Deal' in the 1930s was an investment equivalent to 40% of GDP. In comparison, this is barely pocket money at 0.2% of 2019 GDP. It isn't in any sense the long-term strategy or concrete immediate action both needed to properly address either the climate crisis or the looming unemployment crisis.

It should also be seen in the context of cutbacks to climate action within the past five years - the dramatic fall in home insulation, removing support from community energy schemes, scrapping 'Zero Carbon Homes', etc.  To add to the impression of running to catch up with where we were six years ago, the government is even said to be considering a 'Green Investment Bank 2.0' - just a few years after privatising the original Green Investment Bank.

- £2bn in grants for home-efficiency upgrades. About £1bn will go in grants of up to £10,000 for the 'poorest households' (but homeowners), while a further £1bn will be available in vouchers of up to £5,000 covering two-thirds of the cost for other homeowners. It is unclear what support may be available to private renters, who make up a large proportion of the UK’s households.

- £1bn for green measures in public buildings, such as schools and hospitals.

The Chancellor said that the funding could make over 650,000 homes more energy efficient. However, at least 15 million homes need insulation over the next decade. If the scheme is not extended into a long-term plan to create sustainable jobs, not only will it fall far short of what is needed, there is a risk that it will simply repeat some of the pitfalls of earlier schemes - not prioritising those most in need, and even funding work that harms people's health.

The attempts to get home energy efficiency improvements back on track are off the back of a dramatic fall in installations after subsidies were scrapped by the Conservatives in 2015. In the Committee on Climate Change's annual report to government, they compared the total expected (835,000 across loft / cavity wall / solid wall) with the actual figures in 2019 (79,000)

Funding for cycling and walking

£2bn funding was announced, with a Cycling and Walking Plan for England, welcomed by campaigners but contrasted with the £27bn road-building programme.

Campaign group Plan B announced a legal challenge, arguing that the government's plans contradict the Paris agreement, in particular by directing over  £4 billion  bailout funding to airlines, car manufacturers and oil and gas companies without climate conditions.