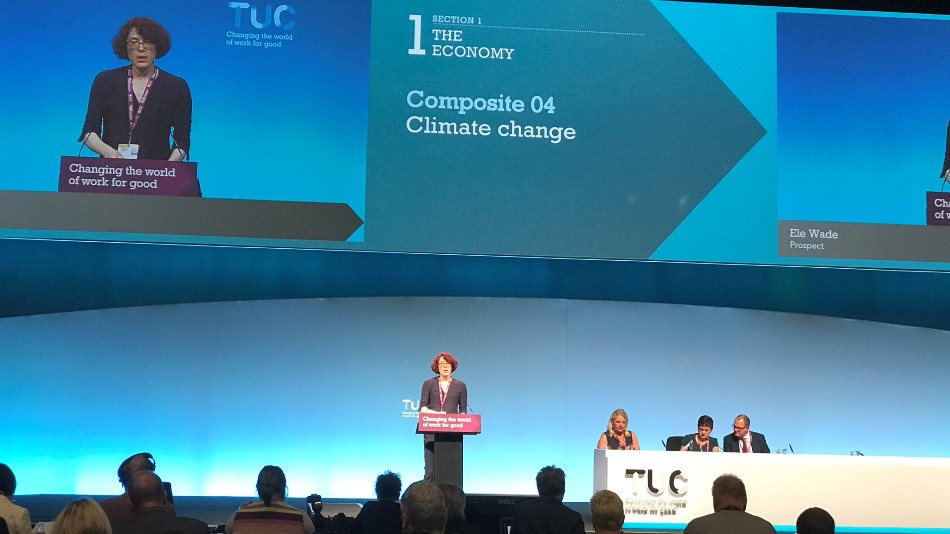 The following motion has just been passed by TUC Congress.

Thanks to the Bakers, Food and Allied Workers Union who moved the motion and CWU, FBU, ASLEF and TSSA who submittted amendments.

Congress notes the irrefutable evidence that dangerous climate change is driving unprecedented changes to our environment such as the devastating flooding witnessed in the UK in 2004.

Congress further notes the risk to meeting the challenge of climate change with the announcement of Donald Trump to withdraw the US from the Paris Climate Agreement. Similarly, Brexit negotiations and incoherent UK government policy risk undermining measures to achieve the UK carbon reduction targets.

Congress welcomes the report by the Transnational Institute Reclaiming Public Service: how cities and citizens are turning back privatization, which details the global trend to remunicipalise public services including energy and supports efforts by unions internationally to raise issues such as public ownership and democratic control as part of solutions to climate change.

Congress notes that transport is responsible for a quarter of the UK’s greenhouse gas emissions and believes that a reduction in carbon dioxide levels must be the basis of the UK’s future transport policy in addition to building public transport capacity and moving more freight from road to rail.

Congress believes that to combat climate change effectively and move towards a low-carbon economy we cannot leave this to the markets and therefore need a strong role for the public sector in driving the measures needed to undertake this transition. Congress notes that pension schemes invest billions of pounds into fossil fuel corporations.

To this end, Congress calls on the TUC to:

i. work with the Labour Party and others that advocate for an end to the UK’s rigged energy system to bring it back into public ownership and democratic control

ii. advocate for a mass programme of retrofit and insulation of Britain’s  homes and public buildings

iv. lobby for the establishment of a Just Transition strategy for those workers affected by the industrial changes necessary to dvelop a more environmentally sustainable future for all, and develop practical steps needed to achieve this as integral to industrial strategy.

v. consult with all affiliates to seek input into the development of a cross-sector industrial strategy that works towards delivering internationally agreed carbon emission reduction targets